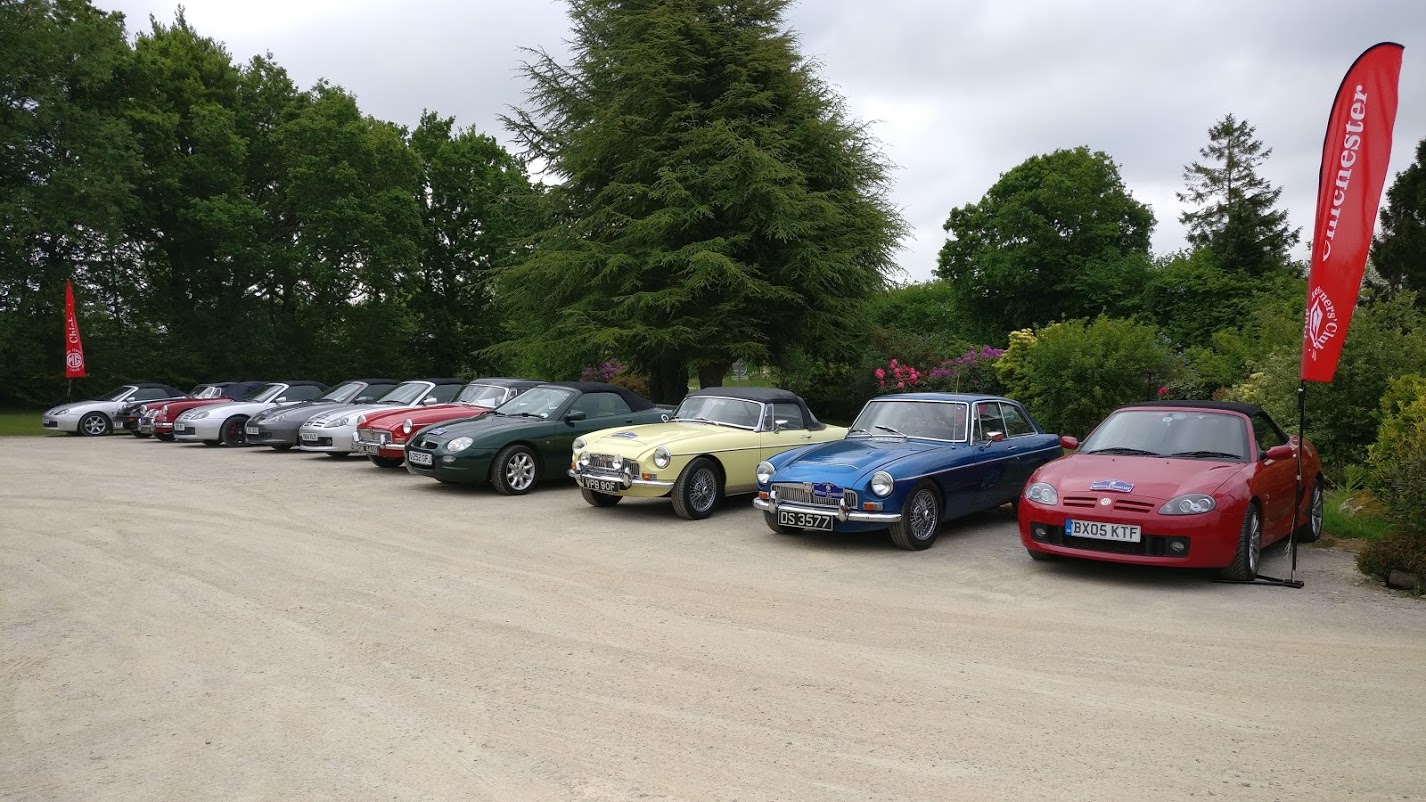 Shortly after a lovely sunrise on Tuesday morning 14th May, 8 MGs from Chichester met on the A27 Emsworth service area before driving down to Portsmouth to meet an MG from Bournemouth & Poole, another from Runnymede, and to catch a ferry to Ouistreham.

After the channel crossing, the 10 MGs drove together along the Normandy beaches, stopping at Arromanches to see the remains of the mulberry harbour and the centre of the D-D landings, before reaching their first chateau hotel and joining up with the 11th MG.

The cars made a splendid setting for a photo shoot in the courtyard of the chateau, while the Tour Runners enjoyed a drink on the terrace in the evening sun and a fabulous meal in the restaurant with a few beers and glasses of wine.
Following a traditional French breakfast the next morning, the 11 MGs drove down to Utah Beach to share a minutes silence in remembrance of the 75th anniversary of the D Day landings, and to remember Philip, who couldn’t be with them. The setting, the vast expanse of beaches, the terrible loss of life, and the history had an impact on everyone.

To avoid a large convoy of MGs driving down quiet picturesque French roads and countryside, the Tour Runners split up into small groups visiting their choice of historic and medieval towns, small fishing villages and harbours, vineyards, museums, and of course plenty of cafes and restaurants.

Everyone met up in the evenings for a good get-together and French meal at each of their hotels, which didn’t disappoint. From the excellence of the first chateau, the standards were set; another 16th-century chateau provided spectacular views from the Tour Runner’s bedrooms across the valley below with another superb setting for a photo shoot for the MGs, and a banqueting hall for their evening meal.

All seven hotels had their own French character, serving lovely food and wine; and on the last night at Pont Ecrepin, where there was devastating fighting after D Day, the hotel proprietor arranged with the Mayor that the 11 MGs should have pride of place in the Town Square. To the delight and interest of the locals, the cars were given their own parking area for everyone to mix and see.
Throughout the tour, in both Brittany and Normandy, the Tour Runners were met by the French people with interest and kindness, and the older citizens waved as the cars drove through their villages. The commemorations of D Day were in every town and village, with French, British, American and Canadian flags flying everywhere.

The tour took the MGs along the spectacular north coast of Brittany to Finistere & Ouessant, through the undulating low lying Arree & Noires Mountains in central Brittany, and also through picturesque Suisse Normandy.

Totalling approximately 1,000 miles and averaging some 140 miles each day along quiet roads and through the beautiful French countryside, the 11 cars had a great Tour. While the cars, the hotels, the scenery, the good food and excellent wine, and good weather were the recipe for a great tour, it’s the Tour Runners that made the tour such a success.

You can add your own photos to this page here.